The Old Oak Tree of Goodness 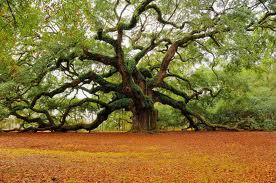 It’s warm in this room where our little gas heater blows a gale of of summery heat over all of us on a freezing night. And hearts are warm too, especially now that the second son is back from Giant Land (USA), his eyes having the look of a man delighted in a universe with so many stunning mysteries and facts and stories and ‘stuff going on’ that it’s hard to know where to begin. But something else in the eyes takes me (his dad) back to the hard places of my own young manhood where the fresh innocence of childhood tasted blood and had to learn to enjoy the smoke of battle and to fight for what that innocence stood for, having been bruised, scarred, muscled-up a bit and made dangerous.

Some would say that innocence is lost once a a boy is hurt or disappointed (and the sooner the better) but the original Latin word came from the idea of ‘not being one who does ‘harm’. In a crime for example, the innocent one has done no wrong. Unfortunately—in modern usage—the word has taken on connotations of weakness and even stupidity and has driven many young people to look for some way of losing their innocence in order to be somehow ‘better’ or ‘grown-up’. But what if when we lose our innocence all that has really happened is that the great big Oak Tree of Goodness that grows in our soul had simply been scratched? And soon fresh new shoots of goodness will be growing from that very scratch, if only we will allow it.

In my own personal experience and from that of many others, this great Oak Tree of Goodness is far more robust than we could ever have imagined. For this is not just some one-dimensional idea invented by classroom moralisers or politicians, it’s three dimensional and as much about truth and faithfulness as it is about imagination, creativity, laughter and anger and the confidence that this Great River of Life is well able to process all the lies, murders and violations the spirits of darkness can hurl at it over an entire lifetime—if only you, the person it lives in, will allow it. So have done with all the shock, horror and mortification (that your favourite screen-faces hope for) and instead dive into this living, infinite and eternal being: the vibrant and flesh-incarnating Good that impregnated the universe at the beginning of time and out of which came all that makes blue skies, rivers and volcanoes—as well as the faithfulness, joy and grace of a new mother making a Christmas present for her first child.
Such goodness cannot be blackmailed or bought by grand speeches and cleverly-crafted statutes on political correctness. In fact it laughs at political correctness because it knows that from it’s very inception pc was a lie created by word-spinning socialisers who—having excised faith and meaning from society—arrogated to themselves the ability to know the best interests of the human heart and, like a badly trained surgeon with a dozen books on surgery arrayed around his operating table, tried to come up with a new Moral Law (Heart if you like) and made their decisions on the run rather than levelling with the patient before the operation started. The problem of course (as anyone would know who has been ‘under the care’ of a tweaking, fuddling and excusing doctor), once you jump on the band-wagon of an experiment, pride makes it awfully hard for anyone to get honest, including the patient.
And so here we are (to use another metaphor), western civilisation screaming that it’s having a crisis of meaning when in fact it’s mother (the old Oak Tree of Goodness) watched it throw a tantrum and run out the door centuries ago and is now telling it—like all good mothers do—’OK darling that’s enough screaming now. Time to come home and have a good bath and go to bed.’ But no, we sulk and grump and refuse to come home. And unfortunately many in the world of Christendom are not helping with all their sugary talk of lost innocence. Who said it was lost? ‘Bruised, scarred, muscled-up a bit and made dangerous’ maybe, but definitely not lost. So who first put this pathetic wailing of ‘Lost Innocence’ out there anyway? No one will ever know, but it has the smell of a poisoned chalice passed around by those filthy spirits.
And now (back to the other metaphor) it’s like, ‘Hey! I’m talkin’ to you Western Civilisation. Swallow your pride and get your stupid ass off that goddam operating table. How dare you allow your imagination to slip down into that quivering and quailing coma of victim-distress when your great old Oak Tree Mother waits, strong, kind, brim-full of forgiveness and about to burst into peals of laughter at the state you’ve gotten yourself into—and all for the sake of your pride!’
Meanwhile, back at that table where our little family celebrates with the son becoming a man, we find that plates are placed before us with large portions of steaming meat-loaf soaked in a sauce that’s a combination of something like perfectly-cooked bacon, something sugary, and something spicy. And all bordered with bright orange slices of carrot, green beans and broccoli: the steam rising like that from the shoulders of a bank of front-row forwards ready to pack down in a scrum on a frosty morning—probably not the greatest simile, but anyway the idea is ‘deep, rich, full of life and ready to smash something’.
We start with grace (as you should at the start of a rugby game too whether you’re a spectator or a player: especially if you’re a player), and then comes the slicing and forking and staking of forks and the tasting. Oh yes! The tasting. And you just want it all to last forever. And as tends to happen when the food and the vibe is good, stories from the day start coming out while we’re eating: not supposed to eat with your mouth full but that’s when you most feel like talking and singing! Somehow the conversation moves to school and the way certain teachers at the old (and for some still present) school used to be a pain but still turned out to be excellent teachers. Then it’s, ‘What about the ones that were a pain and were no good either?’ And after that it’s all about the latest in a string of weddings being announced—this one happening in two days time. What we don’t know yet is that the groom will be in a nasty car accident the night before the wedding and will be unable to be at the church, but that’s for later (and another Oak Tree of Goodness asserting itself). So much happening while we sit around the table and celebrate with the son—and we’ve barely even touched on all the stories from Giant Land yet.