Reality Is To Be Lived 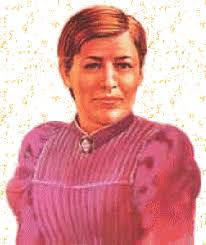 After decades of missionary service in Africa, Mary Slessor said, “It is a real life I am living now, not all preaching and holding meetings, but rather a life and an atmosphere, which the people can touch and live in and be made willing to believe in when the higher truths are brought before them. In many things it is a most prosaic life: dirt and dust and noise and silliness and sin in every form, but full too of the kindliness and homeliness and dependence of children …”45

Thomas Cahill said, ‘when we read the lives of the Celtic saints we find ourselves taken unawares in the company of lions and it’s every man for himself’46. Mary was one of those lions and Cahill was talking about the terror this kind of person is to our pride. Pride must  find some way to excuse us, to show that because of genetics or upbringing, we have good reason not to expect anything like this of ourselves. At all costs we must protect ourselves and our children from any sense that ‘this could be you one day’. This is the terror of the logos incarnate, the divine word revealed in the flesh of ordinary people. It  would be less of a worry if we could show that they had started out with some added advantage, that  they were not ordinary.

The author says in the preface, “some have said that she was in a sense a miracle, and not therefore, for ordinary people to emulate. Such an estimate she would have strongly repudiated. It is true that she began life with a strong character, but many possess that and come to nothing. She had on the other hand, disadvantages and obstacles that few have to encounter. It was by surrender, dedication and unwearied devotion that she grew into her power of attainment and all can adventure on the same path.” One day when a new missionary lady told her she did not know what to do, Mary exclaimed, “Do, lassie? Do? You’ve not got to do, you’ve just got to be and the doing will follow.”

On the other hand there are those of us, especially preachers, who are quick to own someone like Mary as an Exhibit A in our gallery of pulpit stories, as if she had it sorted, because she was ‘like me’. For a long time Mary was ignored by the preachers and teachers. Regarded with concern, and given very little support, she allowed herself to be poured into the hearts and souls of the untouched tribes, even for a time living in a small curtained room in a harem, as a temporary measure, while a chief built her a house. She had no time for citadel-style Christendom that unwittingly demonstrates its cowardice by trying to impress pagans with shows of power and noise, like a drunk outside a police station.

Mary was a seasoned missionary of 30 years when she wrote those words about “… a life and an atmosphere …”, having won over whole tribal groups to the Kingdom. She knew all about preaching and holding meetings and churches being planted, but in these words she tells us what really makes her heart beat faster.  It’s what happens outside the ‘meetings and preachings’ that turns hearts and minds, because this is “a life and an atmosphere, which the people can touch and live in and be made willing to believe in”.

This plausibility matrix is not an accident and although it takes the shape of a richly coloured social fabric, incorporating individual personalities, families, tribes and political structures, it is not the creation of clever social engineers, it is the fruit of total surrender to—and a compliment from—a mysterious thing called Agape love, which happens when individual believers and their communities engage and become sweetly embedded in real life, assuming that this is a world drenched in the love of God but that it is also a world whose heart and soul will shrink back and hide like an abused child if its shepherds (the human race) refuse their great calling, and so, like Mary, they happily forego the allure of material comforts and instead pour out their lives in the love and service of their neighbours—not because of fear or guilt or to prove something but because they have allowed themselves to be what every fabric of their soul tells them they were made to be. Hence they delight in what most others would despise. As Mary said, a place of “…dirt and dust and noise and silliness and sin in every form, but full too of the kindliness and homeliness and dependence of children …”. In CS Lewis’ Narnia Chronicles, Aslan says, ‘In the end eveyone gets what they want but they might not like it.’


Here are three recommended readings on ‘allowing reality to be lived’, as spiritual exercises in the new year …