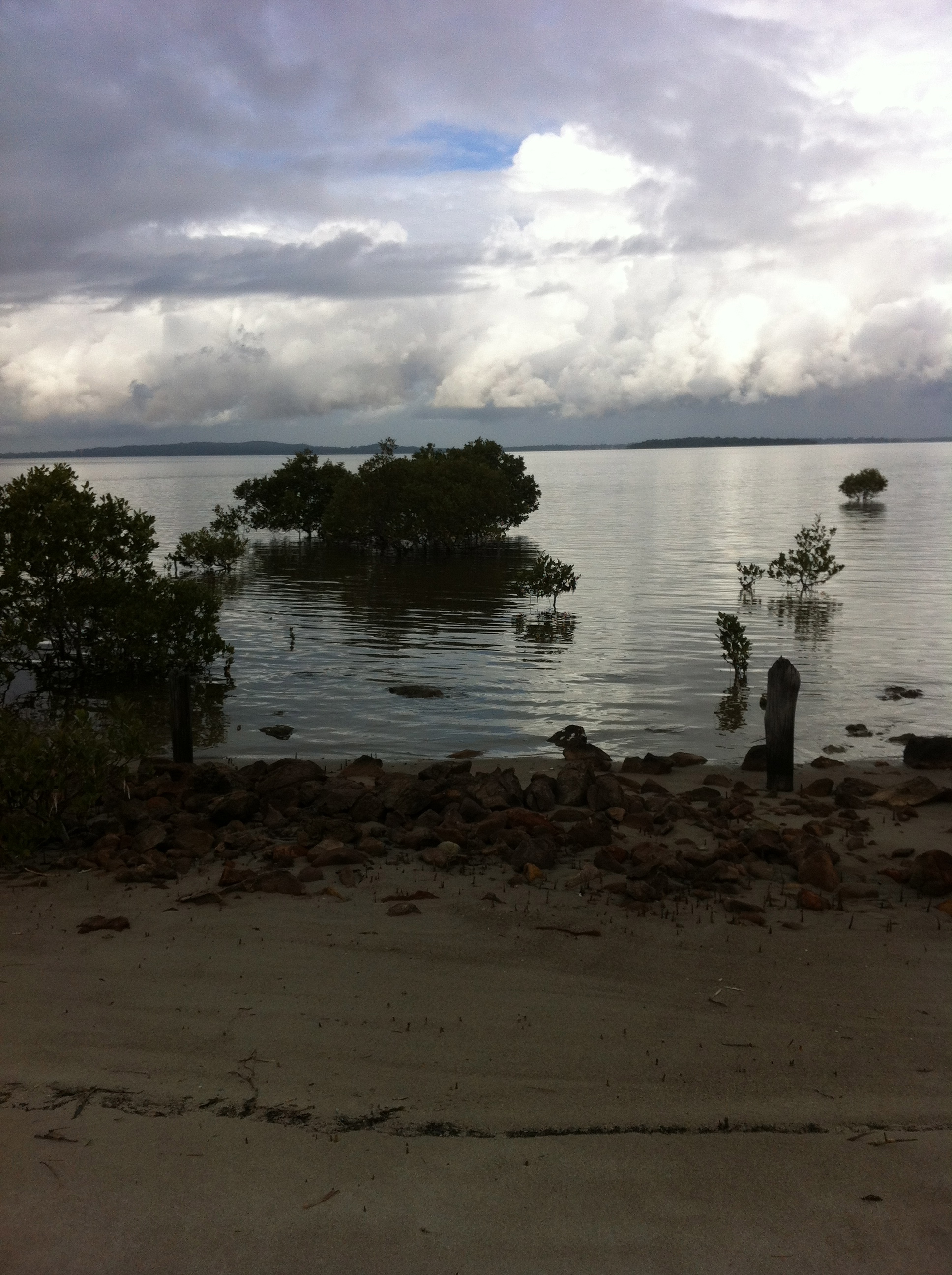 The Bait in Daylight

That Mysterious Place of Stories (from a previous blog) had some remarkable beach frontage around it but the weather had other ideas and by the time evening came we had all taken refuge inside it. As you will see from the (previous) photo, the ‘indoors refuge’ was an unusual building: large panes of coloured glass had been built into it on all sides but in such a way that you didn’t notice them until after dark when you were outside and the lights glowed inside. That of course made me think of fish bowls and aquariums, which then got my imagination going about ‘being on show’ and the thought of—like a fish—being lured here, when I in fact I imagined that I had freely chosen to be here. What if I had been lured here?

Scolding myself for this indulgence in the ‘horror genre’ of my imagination and for being so macabre I pushed all these thoughts aside and wandered out alone into the rainy night. Before long I found the shoreline. Should say ‘stumbled onto the shoreline, aided by the pungent aroma of fish and the splashing of waves’. From there I walked out across a beach-ful of boulders that reminded me of the backs of metamorphosing orcs—you know like the slithery bodies of what used to be elves in Lord of the Rings—and stood there on a patch of sand, staring out at a dark sheen of water. For a fraction of a second (how silly of me) I was sure that I had just seen the profile of a massive T-Rex head, with eyes glowing red, rise up from the waters, look at me and then go back down. As if to say, ‘Good, the chosen one has come.’

I wanted to run, but being a rational, educated adult, I stood there and waited: hemmed in by rows of rocks in front and behind, and mangroves, sea water and broken down pieces of jetty all around. There was no way my imagination was going to get the better of me after all these years.

Eventually the feeling subsided and instead of being a place of fear, the dark lushness around me began to feel like some kind of ‘entry point’—even an entry point into the universe. Into ultimate reality. It was so beautiful I wanted to weep and to cry out, ‘I’m yours and your mine!’ Yes, ‘me’, the little hominid was was being invited in!

Then I thought about the different ways that the word ‘invitation’ could play out. In medieval times for example, if you happened upon a Swart Faery in a forest you had committed a serious offence even though you had not chosen to meet it! Somehow it had been arranged but it was now your fault. ‘You have to be careful with these invitations from the numinous,’ I told myself. ‘Cause if you upset the inviter you may find yourself being compelled.’

I comforted myself with the thought that overhead were the stars (which I knew) but there was still this problem of the dark sky that came right down to the water in a kind of sky/water horizon where the constellations and the earth met. Then I began to feel confused again. And the rain pelted down and the moon shone dimly and I felt old and tired.

That was when my knowledge-brain sallied forth as if to rescue me and I began to meditate on the fact that my body was essentially a complex arrangement of molecules and atoms and in real terms was actually nothing more than an elegant arrangement of electrical charges, which for some strange reason hang together around the mind and spirit of something called ‘me’. I had been walking for instance, which meant that sometime ago my mind had gone, ‘OK all you “me” charges, let’s go!’—never be able to use the word ‘my charges’ again. And to make matters more interesting they are always dancing around—like kids with ADD—at a speed of approx. 186,000 miles per second. A kind of permanent dance party—if you don’t believe me look up Heisenberg’s Principle of Uncertainty. And yet tonight I had managed to get all the way down here. Talk about power! T-Rex or some weird liminal alien? Bring it on!

As if in answer to my foolish ‘throwing down of a gauntlet’, I felt a pushing movement under my boot. Hitting the button on my iPhone, I saw that on the sand were hundreds of slimy root-tips, probably from the mangroves, pushing their way up out of the sand. And this particular one was lifting up my boot. I’d never seen such a thing in my life, never heard about it, not even on youTube. I moved my foot but it happened again.

Irritated, I walked further out into the water but there were more out there and they were longer and penetrating my clothes. So, wrapping my rain jacket around me, and presuming that plastic would work better than just cotton, I was able to keep them at bay. But that only lasted a few minutes and then they were burrowing through the thick layers of the jacket.

Furious that this beautiful place could be ruined by a squaddle* of mangrove roots on steroids, I wriggled out of my boots and clothes, bundled them up and hoisted them onto a patch of mangrove scrub, which left me in just boxer shorts. Fortunately, the rain (coastal rain) had warmed the air and water and as I swam out into the deep—apart from a little mouthful of briny seawater and a cut on on my foot from one of the mangroves—I was now free of those pushy intruders and was able to relax and enjoy my sweet and lovely rendezvous with the ocean, a few stars and a grey moon.

Lying front forward, I began to float further out, delighting in that smooth line between sky and ocean the way a musician might enjoy a harmony between a violin and a voice. But then, a long shiny wobble (about the size of the roof of a car), moved, I was going to say ‘across’, but it was in, through and under the water, barely twenty meters further out.

Terrified, I swam backwards at a rate of knots. But then I came to my senses and told myself that I wasn’t the only one mad enough to get out here in the pouring rain: this had to be a bow wave caused by some of the students venturing out in a canoe or … No. Canoe did not work, this was far too big and swollen for that. My next thought was the oyster farmer guy up the road, maybe he had some kind of equipment that moved against the tide. ‘Exactly what equipment are we talking about?’ my suspicious brain asked. And I had no answer.

So, I trod water and kept thinking and wondering—determined not to be lured by my fears into that bottomless pit of the imagination. There had to be some perfectly logical explanation. But the more I waited out there under the dark sky and the more I looked and watched, the more it seemed there was going to be no explanation: no human voice, no laughter, not even the slap of an oar on the water. I was in: hook, line and sinker.

*squaddle: a living, moving miasma of mango roots looking for a home (Dictionary of Mangrove Maniacs)